All of our current weathervanes will be shown in this category, as well as Folk Art carvings, rocking horses and "whatever". 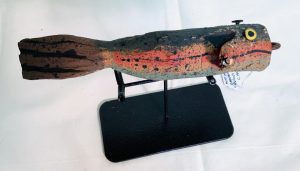 A Most Unusual Folky Carved and Colorfully Painted Fish Ice Fishing Spearing Decoy 8” Long. Creatively Crudely Carved Curved Body with Unusual Wildly Flared Head and Gills and Curved Tail with Deeply Carved Grooving Along the Tail. Lots of Color from Dark Green, to Mustard and Rose, to Blue Green and a Brown Tail. Accented with Black Spots. Large Painted Nails for the Eyes. Weighted Body and Large Metal Eye for the Line Attachment. Very Odd All Around. From an Old Boston Area Collection. Probably from the 1950’s – 1960’s. 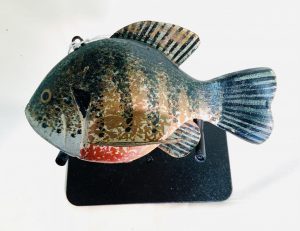 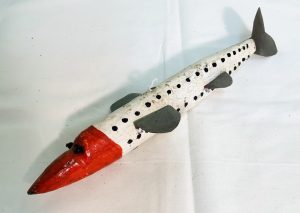 A Wonderful Carved and Paint Decorated Flying Duck Ice Fishing Spearing Decoy – 9” Long. Fine Detail Carving, especially the  Bill, Head and Long Neck along with the Carved Fan Tail and Extended Legs that End with Dangling Metal Feet. Decorated in Black, Gray and White Paint. Glass Eyes. Nice Worn Patina. Small Chip on the Underside of the Bill Tip. Weighted Body. Stamped with an Impressed “B” for the Bethel Family of Carvers from Park Rapids, Minn.               . 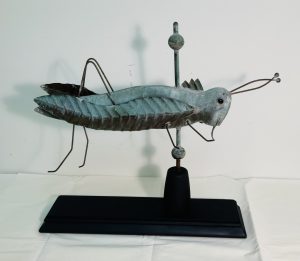 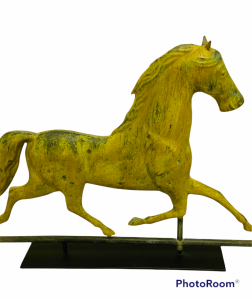 A Molded Copper Early 20th. C. “Black Hawk” Running Horse Weathervane with Its Original Worn Surface. Size = 24 1/4” Long by 18” Tall without the Display Stand (Cross Bar to Top of the Head). Very Nice Original Condition with No Bullet Holes or Repaired Holes, Just Some Non-Penetrating BB Dents Visible in the Photos. Probably Early 20th. C. We Also Have It’s Original Directionals (One Arm of the Directionals Is Separated from the Unit but Very Repairable) and Decorative Ball. The Base Pictured is Not the Base that Goes with the Vane. The Base for this Vane is a 2 Layer Wood Base with a Wood Molding Surround Painted Black and It’s Original Rod. Actually Better Looking than the Plain Metal Base. 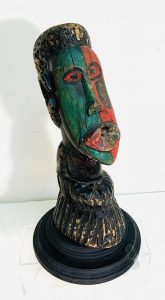 A Most Interesting Well Carved Lignum Vitae Caribbean Folk Art “Rastafarian” Culture Marijuana Smoking Device. I Understand These Carved Heads Were Were Used By Individuals and Hand Held For Group Marijuana Smoking Ceremonies. There is a Through Hole From the Mouth to the Top of the Head for a Tube That Would be Extended From a Common Smoking Source to the Individual Participant. The Carving is Very Nicely Done Using a Very Hard Native Wood and Represents a “Rastafarian Man’s” Upper Body. Nice Original Paint. Probably from the 1930’s or 1940’’s. A Nice Cultural Piece of Folk Art

An Early, Probably 18th. C. Ash Burl Bowl — Nice Larger Size at 15 5/8” Diameter by 6” Deep. As You Can See in the Photos the Bowl Has a Striking Burl Pattern with Small Areas of Ash Grain. Accented with a Nice Raised Rim. A Wonderful Turned Form. The Condition is Excellent with Only a Single Very Tight Line Shown in a Photo. New England or New York Origin. 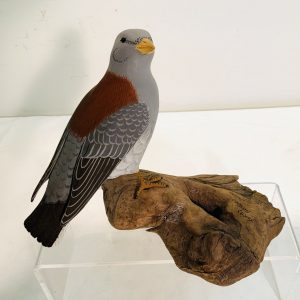 A Wonderfully Carved and Paint Decorated “Gray Headed Junco” Bird by Noted Carver Harry Ross, Norway, Maine, 1970’s. Superb Carving and Paint Decoration Give this Very Pretty Bird a Nice Presence. Mounted on an Old Piece of Maine Driftwood. Excellent Original Condition with No Issues. Earlier in His Career He was a Noted Decoy Designer and Carver in Conn. Later Retiring to Norway, Maine Ross Extended His Skills to Birds. We Have Several Other Fine Examples of His Work.